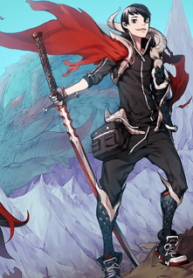 As Shin Youngwoo has had an unfortunate life and is now stuck carrying bricks on construction sites. He even had to do labor in the VR game, Satisfy!
However, luck would soon enter his hopeless life. His character, ‘Grid’, would discover the Northern End Cave for a quest, and in that place, he would find ‘Pagma’s Rare Book’ and become a legendary class player…
Translator: Rainbow Turtle
Editors: LD and Superposhposh

Audiences define novel just by their own way. Some define it as a kind of entertainment. Some define it as a work. Whatever which way they fine, novel is a fictitious prose narrative of book length, typically representing character and action with some degree of realism.

A Stay-at-home Dad’s Restaurant In An Alternate World